Solar cookers are devices that allow food to cook using the sun as an energy source. They are divided into two families: 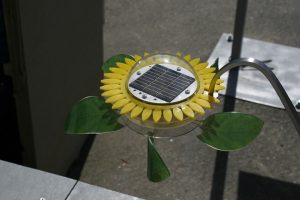 • By Concentration: They are based on concentration of solar radiation on a point, typically through a parabolic reflector. At that point the pot is placed to cook the food. They generate high temperatures and allow frying food or the boiling of water. They are particularly dangerous to the user if he’s not careful.
• Oven or box: The solar box oven or a thermally insulated box is designed to capture solar energy and keep warm inside. The materials they’re generally made of are of low heat conductors which reduce the risk of burns to users and avoid the possibility of a kitchen fire and of the place where it is used. Besides the food is not burned keeping its taste and nutritional value.

There is the possibility of using lightweight materials that are both durable and collapsible. So solar powered ovens may be designed in portable sizes and morphologies to allow their storage, arming, disarming and transfer to be carried out in a comfortable, simple and practical way.

With an understanding of the basic principles of solar energy and access to simple materials such as aluminum foil, cardboard and glass, you can build an effective solar cooking device. The main features of these devices is the possibility of replacing gas or electricity by renewable energy, it also implies a great money savings because they do not need any supply of fuel or other source of energy. All this is accompanied by additional benefits: greater security when cooking and the nutritional quality of cooked foods is better kept. By not handling fire originates not smoke or carbon dioxide and thus get a better result in terms of the environment at the same time, the solar energy cooker allows us to conduct the cooking without wasting their nutritional content.

Use of a solar cooker

Weather plays a very important role here when using solar cookers, we can be absent for a long period of time without fear that the food is overcooked. We can divide the solar energy kitchen according to its systems: there are those based on the principle of accumulation and those employing the principle of concentration: the first is a thermally insulated enclosure on all sides, except for its face towards the sun, it is covered by a transparent to solar radiation material (plastic or glass).

This material allows us to receive and store heat energy in its interior thanks to the greenhouse effect; when using this system food to be cooked must be placed inside a container which can reach temperatures of 90 º C to 120 º C. The second set of solar cooking is parabolic in nature, it is responsible for intercepting solar energy and carries it to its focal area; a high thermal use is reached on the pot where the solar energy is concentrated, temperature can start from the 200 º C and therefore we can perform operations such as stew, boil, cook by steaming, grilling and frying.