How Solar Energy Works- Using it at Home

We all have firsthand experience with the Sun and solar energy. We are aware that the air around us is warmer when the sun is out during the day than when it is obscured at night. We understand that the weather gets warmer during parts of the year where there are more hours of sunlight, and when the sun rises higher in the sky.

Conversely, the weather gets cooler when the sun shines for fewer hours and doesn’t rise as high in the sky. Intuitively we know that the sun is responsible for most of the natural energy that drives our planet. It seems a natural question to ask: “Can we harness solar energy to make our lives easier?” The answer, as you probably know, is yes. The solar energy given off by the sun can be harnessed and converted into power useful for any number of tasks. This article will attempt to explain how solar power works and how it could affect the future of society, and indeed your very own future. 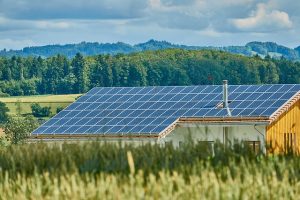 Light, or electromagnetic radiation, is a form of energy. The sun, being so large and powerful, emits particularly energetic light. The most common way of converting the sun’s light energy into useful power or electricity is by using photovoltaic cells or PVCs. In brief, these cells work by conducting the sun’s energy throughout the cell, which knocks electrons loose. Flowing electrons are essentially what we think of as electricity, so enough of these cells can generate quite a bit of electricity when they are exposed to sunlight.

As you might imagine, solar energy is totally renewable. In other words, it is essentially available for free; we simply need the devices to harness it. Solar power results in zero carbon emissions. Since scientists estimate that the sun will continue to shine for at least another four billion years, we can be sure that the sun will provide plenty of free energy for the foreseeable future.

Using solar energy is becoming a more and more realistic option for many applications. Solar power has long been used to run satellites in space. It has been used in rural areas with limited or no access to traditional power grids, and it has been used for street lighting and railway crossings.

Increasingly in recent years, people have been able to use solar power around the house to supplement the power they obtain from the traditional power grid. Solar power has been found to be very efficient for space heating, water heating, outdoor lighting, and general electricity needs. PVC arrays are becoming more affordable as time passes and as solar technology increases.

Currently there is a wide selection of companies offering solar power packages geared toward homes and small businesses. Going forward, it appears that solar power will prove to be one of the most efficient, affordable and eco-friendly forms of alternative energy available to the consumer looking to save money while reducing his or her carbon footprint.